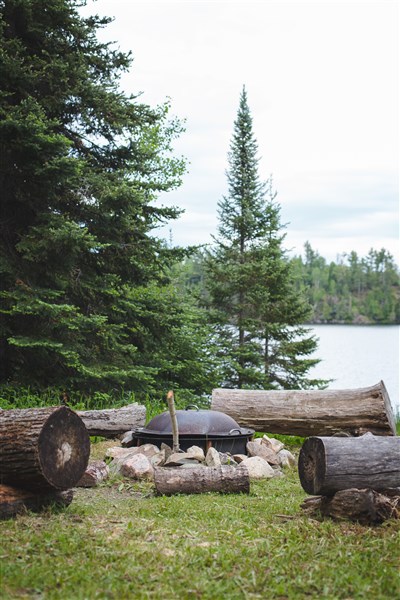 KoWaKan Adventures Base Camp was first carved into the forest as Section 12 Logging Camp, a site developed in the early 1900s by the Swallow and Hopkins Logging Company. Each season loggers would be housed in temporary log structures built on stone foundations which are still visible along the trail the runs the length of the camp. When you visit, make sure to check out the bottomless cast-iron pan and historical knife and fork displayed in the Meadows kitchen pavilion- reminders of the impact we leave on nature and the long history of northern MN.

The site, owned by Lake County, was then under public access until leased by the United Brethren Church, and was developed under the professional skills of Mr. Glen Wallace, a camp architect, Superior National Forest landscape architect and health engineer.
Mr. Wallace's initial plan included three independent areas for camping- two for use by family groups and a third for youth camps serving 30 to 40 campers.
The stretch of forest originally intended for family group use, was later converted into the KoWaKan Base Camp. Each campsite was outfitted with a platform to erect canvas wall tents and two common areas with storage and kitchen pavilions were established, one on Hilltop, overlooking Section 12 lake, the other in the Meadows, with access to the dock and swimming area.
The KoWaKan Base Camp, the only developed property on Section 12 lake, is now leased by the Annual Conference of the United Methodist Church to serve as a gateway to the BWCA, and United Methodist wilderness ministry. The KoWaKan Base Camp and its wilderness ministry have long been supported by pastors, guests and site leaders who felt the presence of God at KoWaKan and have donated time, funds and volunteer work to maintain this sacred Place of the Almighty.